Who is talking about philanthropy?

Posted on December 19, 2018 by ozphilanthropy 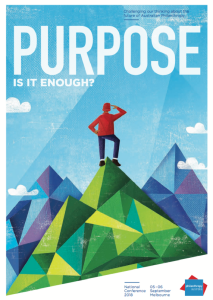 At the Philanthropy Australia conference earlier this year one of the panel discussions featured former Premier of Victoria, Jeff Kennett.  ozphilanthropy found him startlingly funny and he asked some of the difficult questions about philanthropy and charities that people are usually too polite to voice.

These included: “who is really talking about philanthropy?”

“When did we last see something on the front page of the paper, on radio, or “god forbid” on television putting philanthropy front and centre?”

Mr Kennett bemoaned the lack of vision in the country – and that we don’t know where we want to be in 2050.  He feels you can only develop trust if leaders know where they are trying to take the people.

He questioned the role of philanthropy in society – is it to educate the people of Australia in prioritising things that will matter in 2050 or 2100 – and what is the role of Philanthropy Australia?

Joy Anderson from the Criterion Institute responded to this with the notion that the role of philanthropy is to protect pluralism and foster space for dissent.

Mr Kennett countered this by saying that there is less dissent if more people know what you are trying to achieve.  He questioned the role of advocacy of Philanthropy Australia and implied much more should be done.

Questions from the audience:

Q. Does erosion of trust hamper our ability to make change?

A: Our common objective is social cohesion.  Philanthropy has a role in shaping the questions that democracy and society should answer – we need to understand what it takes to be a civil society.

A: We need an organisation which is recognised and empowered to advocate for philanthropy – and this should be Philanthropy Australia.

Q: What role should philanthropy play strategically?  What do we need to do for philanthropy to take a leadership role?

A: There is a need for “translators” as everybody is in their own silos.  We say as a good level of trust, but standing still won’t preserve it.

Rob Reich discusses philanthropy, democracy and pluralism here – it’s an interesting debate which we could well explore more deeply in order to explain philanthropy in Australia to those people who have no idea what it is about.

What do you think about what the role of philanthropy in society truly is?