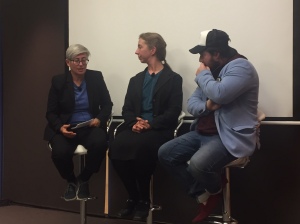 Perpetual has hosted its third installment of discussions and workshops with Stanford PACS (Centre on Philanthropy and Civil Society) with a session entitled Civil Society in an Age of Digital Democracy.

Lucy Bernholz partly deconstructed the title of the session as follows:
civil society is all the ways we come together as individuals to benefit other people
digital is that thing most of us don’t understand but are now completely dependent upon with our mobile phones and email.  We are trapped in a completely designed space which serves the purpose of organisations who sell us technology and applications.  We are overdependent on the digital environment, and cannot separate civil society from the market or government.

“We thought digital and the internet was going to be democratizing – Oh, how we’ve changed”, said Lucy.  The question for discussion was “how can we make democracy thrive in an age of these interdependencies?”

Lucy introduced Vanessa Teague from the University of Melbourne who explores how we can run elections in a secure way so that people can’t fiddle with the outcomes.

Vanessa talked about the history of voting with transparency of ballots going back to the Athenians in 300 BC and the use of carefully designed ballot boxes and prepared papers to secure the integrity of votes.

Modern elections now use software to code and count votes.  However, is this valid? Vanessa gave a fascinating introduction into how online voting is supposed to work – and how it doesn’t.  She and her colleagues discovered a bug in the software implemented in New South Wales in the 2015 election.  The verification process for checking and confirming people’s votes was shown to be fallible and the system was not designed to make failure evident or visible.  (No one discussed the hanging chad).

Adam Jacoby, more directly addressed the democracy part of the topic. Adam asked:
1) Is there an ideology that can provide a solution for every problem?
2) Does government provide access equally for everyone?
3) Does government enact the will of the people?

Adam believes that if we answer no to more than one of these questions then we are not in a true democracy. His organisation, MiVote, has created a model where every citizen can have a say through a platform in the blockchain space.  It is designed as a democratic ecosystem which runs votes to gauge sentiment on various issues.  They do not ask binary yes/no questions and believe in providing information statements that voters must read before casting their vote.

MiVote does not adopt any policy positions unless there is at least a 60% consensus on an issue.  Information provided to their voters is based on fact and usually third party peer reviewed papers.

Questions from the floor raised some interesting points:

Why now? – there is a role for technology in enabling people to be better educated.  This is an accessible model which can address “fake news” and echo chambers.  Technology can play a role in making voices heard and ensuring equality.  The idea of a voice and having agency is very desirable in many places (MiVote recently launched chapters in India and has seen large take up there).

What’s the business case for online voting? No strong rationale yet apart from access for people with disabilities or vision impairment.

How do people with power respond to MiVote (ie Alan Jones)? Some people with power are concerned, but the media does have a role to play.  Voting should be based on fact.  A US billionaire who loves the idea of MiVote declined to support it because it could lead to the loss of his own access to power and personal influence.

How can you make sure people read the information (terms & conditions)? The site is showing people are spending enough time reading and some click further to the source material.

If there were mass adoption of this kind of model it is a sentiment check and nonbinding on legislature.  How can the legislation reflect the sentiment? The answer to this focussed on the security issues which will still apply, especially as influence of this model increases.

How does it work if politicians ignore the sentiment expressed? If sentiment is made more transparent it becomes harder to ignore.  The platform allows any individual to run as a MiVote independent candidate as long as they sign on to seventeen behaviours (and agree to a hefty damages claim for any breach of conduct).

Some in the audience were left shaking their heads confused as to the connection of the topic with philanthropy, but I found it a thought provoking and stimulating discussion.  If philanthropy is truly to have social impact, philanthropists need to understand our social and political environment in order to be able to create positive outcomes.

What are your thoughts on new technologies and the democratic process?