Savvy Giving – a personal reflection – a guest post by anonymous 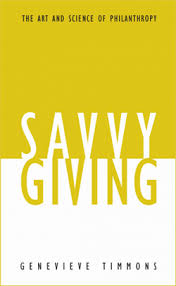 Savvy Giving by Genevieve Timmons is what could be described as a ‘primer’ or a ‘nuts and bolts’ book that provides an excellent overview of giving for the beginning philanthropist. Timmons discusses that there are many ways to make a difference through giving, noting that giving is not just for millionaires but for anyone who wants to make a difference by creating a positive social benefit through giving. Savvy Giving she notes, ‘offers a pathway through the philosophical, creative and practical challenges of grant-making’. (P.14)

This was the first book I had read on the topic of giving and what it means to be a philanthropist. Whilst for many years we had donated to ‘good causes’ and contributed through volunteering, we had done so in a haphazard manner. Our goal when my family and I ventured into the world of giving through a family foundation was to be both structured and strategic. Our areas of focus differ but we all agreed that we wanted to achieve maximum impact and lasting structural changes that would result in systemic change, thereby improving the well-being of others who through no fault of their own are disadvantaged in our society. Whilst each of us has a passion for areas we wish to support, Timmons’ book has assisted me to start thinking about a framework for how our funding can potentially generate greater outcomes for the projects we are interested in supporting.

My first question would have to be, ‘how does this book help someone who knows very little about philanthropy’? My initial response is that it gives a clearly developed step-by-step process of thinking and actions in the ‘how to’. Whilst this may be seen as simplistic, I found to be extremely helpful, as one could feel overwhelmed when not knowing where to start.

Timmons suggests you start with ‘knowing yourself and what is the catalyst and motivation for giving’. How sensible! For me before jumping into the ‘doing’ it was extremely helpful to be able to explore my values and the foundation of these. This process led to interesting conversations within our family and in particular with our children. Values such as human rights, fairness and equity don’t just emerge from thin air; there is always a narrative behind these ideals and values. For me, I was able to tell some stories of my childhood to our children, how my parents had little money but always had an open house for those in need. How my mother would stand up and alongside those who were discriminated against. For those who came from different cultures than ours, she persistently and intelligently argued for their rights until she won the case. Like Timmons, my parents also had an ‘enduring spirit of generosity’ and this is the legacy they have shared with me and I in turn hopefully have embedded in our children.

Since starting a course on philanthropy, I have begun to read other articles and literature that explore peoples motivation and the ethics for giving.

Many of these such as Peter Grant’s ‘The Business of Giving, the Theory and Practise of Philanthropy, Grantmaking and Social Investment’ (2012)* and Peter Singer’s ‘The Life you Can Save: Acting now to end world poverty’ (2009)**, explore a deeper level of argument that it is a clear-cut moral imperative for all of us to give more to charitable causes that help reduce poverty and disadvantage. Whilst Singer makes the distinction between the ‘ethics of giving’ and the ‘practicalities of giving’ and how much should one give and where it should go, he agues that these should not get in the way of the fundamental issue that we should give. Whilst researching this area of exploration I was taken off to thinking about what Eva Cox described in her Boyer Lectures “As a Truly Civil Society“ (1995). Dianna Gribble – the Deputy Chair of the ABC at the time noted Eva Cox, was ‘a forthright commentator on social policy. Her critique has influenced policy debate in the areas of social security, superannuation, economics, child-care, migration, education, family law and women’s affairs’.

Eva Cox took what Gribble described as ‘a radical look at the collection of somewhat forgotten values -such as trust, co-operation and goodwill -that hold society together. She argued that we are losing that important social glue and that current debates about citizenship are narrowly focussed on citizens as competitive individuals rather than as social beings. Whilst this may be seen as a diversion from the central theme of Savvy Giving, it does for me give depth and expand on what I would argue that Timmons opens the reader up to in her discussion on ‘start where you are, know yourself’. (P.17)

After exploring why one gives, Timmons explores the genesis of philanthropic giving. It was interesting to read of the cross- cultural understandings of ‘giving’ and how they have been embedded in historical and spiritual parts of many societies across the centuries. From working in the not for profit sector, or as I now have decided to call it the ‘not for distribution’ sector, I am acutely aware of the difficultly that many in the sector face around securing the sought after ‘DGR’ status. It was pleasing to read that Timmons expands on this area in Appendix 2, giving the reader a clear definition of the status as well as the variations in the types of DGR status. For Indigenous organisations there is an excellent resource that supports the process of applying for DGR; SNAICC’s Guide to Applying for Deductible Gift Recipient Status (and Surviving!), October 2012

Linking to the first chapter, Timmons goes on to discuss which causes to champion. I particularly like how she describes giving as being ‘a powerful expression of the philosophical and politics of the donor’ (p.33). Once again this ethos fits with my understanding of the ‘personal being the political’ as proposed by Michael White who developed a therapy of working with people in counseling that is respectful and builds on a persons sense of self (Narrative therapy). He, like philosophers such as Derrida and Michel Foucault, the French postmodernists, discusses discourses on power and how power underpins the way in which society functions and how relationships operate. As Foucault noted, power is everywhere. Power is what makes us what we are, operating on a quite different level from other theories. This knowledge helps me as the donor, strategise and plan the most effective ways of making a social impact. My belief is that donors need to listen to communities, build on their strengths, essentially empower them to formulate the answers to the perceived problems, whilst supporting this process to occur – ‘allowing them to lead’ as noted by Mary Jane Rivers from Delta Networks, New Zealand (p.37) and taking a ‘whole of community approach’ as another philanthropist from New Zealand Jennifer Gill noted (p.54).

In Timmons’ language she discusses the point of the expression of the philosophical and politics as ‘a theory of change’ – ‘a planning process which involves deliberately unpacking donor intentions, identifying any underpinning assumptions, clarifying who will benefit, confirming how the intended changes will happen, and describing what is required to bring about that change. (P.37)

As we progress through the book one area that particularly captured my attention was the discussion on governance. As noted earlier, as I work for an Indigenous NGO, good governance is crucial (as it should be with any organization). I have found however that Indigenous organisations receive a lot more scrutiny in this area than other organisations. Timmons deals with this section well citing what the legal financial and operational requirements are. I particularly liked her referencing the work of David Ward’s ‘Trustee Handbook: Roles and Duties of Trustees of Charitable Trusts and Foundations in Australia; 2012 as there are lists of functions and responsibilities giving the reader a clear understanding of what is required in the areas of administration, investment and grantmaking (including responsibilities and risks). (Pp. 63-64). I read with interest in this section the discussion on conflict of interest, raising two issues for me. The first, as being both a donor and one who seeks philanthropic funding for an organization. This can at times require clear thinking and transparency and at times negotiating the boundaries whilst sitting at the table. The second issue around ‘conflict of interest’ is that readers need to look at this issue through a cultural lens. What is a conflict for one culture are family obligations for another. Once again through my role working for an Indigenous organization, we have ensured that the board has clear guidelines and policies for dealing with this scenario. A good resource was developed by Reconciliation Australia and has been helpful to non-Indigenous organisations as well as Indigenous.

Whilst some may view this book as being to general, for me it is a clearly written resource that has been helpful in my beginning journey as both a donor and a seeker of philanthropic giving. As someone who enjoys the ‘narrative’ of story telling, I particularly appreciated that Timmons included a significant number of ‘stories from the field’ (pp. 109-138). It included many quotes from those in the field and for me this is a good starting point that the reader is able to connect with and learn from their wisdom.

Sharon’s note: All proceeds from the sale of Savvy Giving go to the Australian Communities Foundation.

ozphilanthropy welcomes guest posts – contact me if you have a topic or area of interest you would like to write about in this forum.